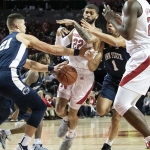 The road ahead won’t get easier for either team.

For men’s coach Fred Hoiberg, it will be managing team frustration. After falling behind by 24 in the second half Saturday in a 76-64 loss to No. 24 Penn State, Hoiberg said it was a disappointing effort for the final 20 minutes.

“You have to find a way to compete for 40 minutes,” said Hoiberg. “We did for the first 20, then you see heads hanging and I’m battling frustration with the guys, there’s no question about that, with everything we’re going through, the losing streak. It’s no excuse to not go out there and compete your ass off, compete until the final buzzer, whether things are going your way or you’re struggling. It has to be a consistent effort for 40 minutes every time we take the floor and that was not the case tonight.”

The competition for the final nine regular season games includes eight that are projected to be in the tournament, according to the latest ESPN Bracketology. Nebrasketball also plays four AP ranked teams in the next five games, beginning at No. 17 Iowa February 8.

For women’s coach Amy Williams, it will be avoiding third quarter slumps. In the last two games, the Huskers have collapsed in the second-half. Multiple other times this season, it has been digging into a hole then having to attempt a late rally.

“They’re pressing and they’re wanting to get off to a great start,” continued Williams. “Then what the problem is you miss a few shots and then you let that take the wind out of your sails a little bit. Now you’re not boxing out and rebounding, you’re giving them multiple looks. You have to be willing and able to lock up that much tighter defensively and we didn’t do that.”

The Huskers have five of their final seven games against teams currently projected to be in the tournament, according to the latest ESPN Bracketology. This includes Indiana twice, one of three AP ranked opponents still on the schedule.