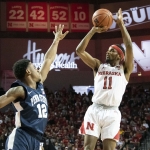 “We were phenomenal early on in that game,” Hoiberg told Greg Sharpe on the post-game broadcast. “The ball was moving and we weathered the storm, and you’d hope going in with a little momentum we could carry that into the second-half.”

“I feel like most of the first halves we have been doing great, playing good maybe today we gave up too many points in the first half,” said Thorjarnarson. “But, still we were competing and for us to come out in the second half with that type of competitiveness is inexcusable. We can’t keep going like this.”

Then the wheels came off for Nebraska as the energy being displayed was less than what the Nebraska coaching staff expected.

“It’s beyond me: We come out in the second half with the same group of guys, same team, and lay an egg for the first three, four minutes of the half.” said Hoiberg.

Penn State scored the first eight points of the second-half as part of a 22-6 run to stretch the lead to 60-39. Kevin Cross made a runner in the lane at the 15.25 mark which was the first field goal in a half court set for Nebraska in 8:56 of game time.

Matej Kavas played nearly eight minutes at the end after not seeing the floor for three consecutive games. Kavas made the most of his time, making a pair of three-pointers and scoring eight points. Akol Arop also saw game time for the second consecutive game.

“I was proud of those guys,” said Hoiberg. “They went out and fought. Diving on the floor…I liked Akol’s energy out there. I told him, ‘We have a week to figure this thing out: Who wants to be on the floor?’ I’m going to put my competitive players on the floor.”

Despite the infusion of energy in the final eight minutes, Penn State cruised to a 76-64 win.

“I’ve been pleased with the guys coming out and their approach, going out there and leaving it all out on the floor,” said Hoiberg. “Tonight, that wasn’t the case. I feel sick about it, in our home building with an unbelievable crowd, to go out there and have that type of thing happen. You have to find a way to compete for 40 minutes.”

“We did for the first 20, then you see heads hanging and I’m battling frustration with the guys, there’s no question about that, with everything we’re going through, the losing streak,” continued Hoiberg. “It’s no excuse to not go out there and compete your ass off, compete until the final buzzer, whether things are going your way or you’re struggling. It has to be a consistent effort for 40 minutes every time we take the floor and that was not the case tonight.”

The Nittany Lions shot 10-of-26 from deep and made 44.8-percent of their shots overall.

Nebraska shot just 38.7-percent for the game, including 8-of-21 from beyond the arc. The Huskers were plagued from the free throw line again, making just 8-of-19 on the night.

Charlie Easley earned his first career start, playing 19 minutes and contributing a team-high two steals. Easley was given the start after Cam Mack was late to a film session, according to Hoiberg.

Mack was held scoreless for the first time this season and tied his season-low of three assists. The three dimes did move him into a three-way tie for sixth all-time on the single-season assists list with Jack Moore and Lance Jeter at 145.

Haanif Cheatham led three Huskers in double-digits with 15 points and eight assists. Cheatham scored 10 of his points 4.25 of the game. Thorbjarnarson and Dachon Burke scored 12 and 11 points, respectively.

This is the seventh consecutive loss for Nebraska.

“It’s a big week for us, heading into next week,” said Hoiberg. “It’s not going to happen again, where the guys out there are hanging their heads and not playing with the type of energy we need to, especially in this building in front of these fans. They support us too much to do that to them. It makes me sick that we played like that in front of our great fans.”