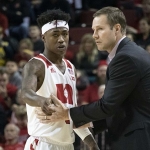 The Nebraska-Michigan game started in much the same way collegiate and professional games across the country have over the past couple days: honoring the late Kobe Bryant.

The Lakers legend died in a helicopter crash in California Sunday at the age of 41. Among the eight others that perished in the crash was Bryant’s 13-year old daughter, Gianna.

Prior to the national anthem, a 24-second moment of silence was observed while the game clock was set to 24.8 in honor of Bryant’s two number while in the NBA, 24 and 8.

A 24.8 second moment of silence was held in honor of Kobe Bryant tonight prior to the tip-off of Nebraska-Michigan. 🙏 pic.twitter.com/LZgdQeCxIw

Following the tip, Michigan took a backcourt violation while Nebraska took a shot clock violation. Those are eight and 24 seconds, respectively, in the NBA.

“I went over to Fred (Hoiberg) and told him ‘I want to hold it for Kobe.’ He said ‘Well good, we’ll do it too.’,” said Michigan coach Juwan Howard. “Yes, I saw NBA teams do it, and I thought it was very respectful to give the respect to the man who has given so much to the game of basketball and inspired all of us. Not only that, he made a lot of us, including Fred and myself, some heartaches and pains playing against him.”

“It was challenging to play against him each and every night,” continued Howard. “I really enjoyed seeing his passion for the game, but what impressed me most on top of that was I knew he was a family man. Watching him coach his daughters’ game, that right there was a beautiful moment seeing how much love he had coaching his daughters games and seeing how much of an exceptional talent she was at age 13. She had a chance to be special. She got the genes from her dad and her mom. I just had to do it for Kobe. Our team was all for it. I told them when Nebraska’s starting lineups were being announced. I said ‘This is what we’re doing for Kobe.’ I’m still hurt by it. I can’t believe it.”

“It was a no-brainer,” said Nebraska coach Fred Hoiberg. “Juwan (Howard) and I both played against Kobe and to honor him before the game and have the two possesions was absolutely a no brainer.”

Like we've seen in the NBA, @umichbball and @HuskerHoops honored Kobe Bryant with clock violations to start the game: pic.twitter.com/EkSD7ZAZbh

As play resumed, it became clear the game would be physical. The first possession after the violations ended in a jump ball.

Nebraska(7-14, 2-8 Big Ten) got out to a five point lead on a Cam Mack three-pointer followed by a Haanif Cheatham reverse layup. Michigan(12-8, 3-6 Big Ten) answered with five straight of their own before Thorir Thorjarnarson and Dachon Burke Jr. each got layups to stretch the lead to 9-5 at the 14:40 mark of the first half. Those would be the two biggest runs for the Huskers in the first half.

“We have stretches, it’s every game,” said Hoiberg. “We have these droughts and lulls and that’s what is digging the hole and it’s hard to keep the energy to get out of that hole and sustain the energy once you get out of it.”

Mack scored five points in the final 1:06, including a runner that banked in at the buzzer, as Michigan led 40-35 at the half.

Both teams shot well in the first 20 minutes. Michigan went 46.7-percent from the field, making 4-of-13 triples. Nebraska shot 50-percent from the floor, including 5-of-11 three-pointers. Mack already had 13 points, five assists, and four rebounds at the break.

Michigan stretched the lead to seven just a couple minutes into the second-half before Nebraska tore off on an 11-2 run to take the lead 52-50 with 13:49 to go. The Wolverines answered with a 19-3 run as Mack scored the only Husker points over a 7:43 stretch.

“When we went through that drought, I think we had a 1-for-12 stretch and it goes from a two-point lead to a 10-point deficit pretty quickly, the ball stopped moving,” said Hoiberg. “A couple of possessions never shifted sides and didn’t get across, and we had been having pretty good possessions all night long; we were shooting high percentage and shot it well from behind the arc. We missed a couple of layups in that stretch, we missed a couple right at the rim, but then we just took some out of character shots and missed a couple open threes.”

Over the final three-and-a-half minutes Nebraska cut the deficit to single digits twice, but couldn’t get over the hump to put together a final run as Michigan took the win 79-68.

“I think we just need to come together more instead of everybody fading away, everybody trying to make a superman play,” said Mack. “I feel like we should all just buy in together and listen to what Coach (Hoiberg) is telling us because he’s a great coach and we need to buy in and listen to him more.”

The victory ended a four game losing streak for Michigan.

“It was a huge win for us,” said Howard. “We came here short handed without two of our best players, with Zavier Simpson at home and Isaiah Livers injured. It’s good to get a road win.”

With the loss, Nebraska has now dropped six straight.

“I think that we’re at a point where we have to go all out,” said Cheatham. “We came in this season knowing we would have ups and downs, every team has it. Right now we’re in a tough stretch. I think it’s something that we have to focus on, have to pull together for these next ten games instead of pulling apart. Put it all in the works and competing forty minutes straight.”

The Wolverines shot 50-percent for the game, including 7-of-24 three-pointers.

The Huskers shot just 38-percent in the second half, dropping their field goal percentage for the game to 44.1-percent while they made 9-of-21 triples. Mack and Kevin Cross combined to go 8-of-12 from beyond the arc while the rest of the team was just 1-of-9.

Cheatham and Cross each scored 17.