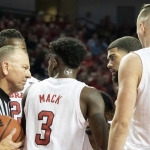 The Huskers had a chance to be the first to win at the Rutgers Athletic Center this season, but instead it was a late shot for the home team to make it five straight Big Red losses.

With the first meeting between these two teams not being close from start to finish, the beginning of the second half gave the feeling that Rutgers was going to run away with it. After a Cam Mack three-pointer, the Scarlet Knights extended their lead to 14 on a 17-5 run.

After back-to-back three-pointers from Rutgers tied the game at 72, Nebraska took a timeout with 1:59 left. The Huskers would have just two possessions in the final two minutes and take just one shot. They turned the ball over out of the timeout but forced Rutgers into one as well. With 49 seconds left Charlie Easley was open in the corner but the shot wouldn’t go down.

The Scarlet Knights took a timeout with 30 seconds to go in the game and 14 seconds left on the shot clock. This should have meant the Huskers would at least get a chance to tie if Rutgers scored, but out of the timeout a missed three was picked up by Rutgers and Geo Baker made the next attempt over Jervay Green with 1.1 left.

The Huskers shot 41.9-percent from the floor and made 11-of-28 three-pointers.

Thorir Thorjarnarson was one of three other Huskers in double figures, scoring 17 points and making five three-pointers. Green and Haanif Cheatham contributed 11 and 10 points, respectively.

Nebraska returns home January 28 to face Michigan(11-8, 2-6 Big Ten). The Wolverines are 4-8 since being ranked No. 4 and even receiving first place votes to start December.