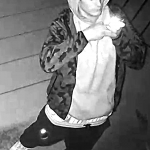 Governor Ricketts says in a statement that he condemns anti-Semitism in the strongest possible terms and urges Nebraskans from all backgrounds to do the same. Ricketts says the Jewish community has been a vital part of our state for generations and says he hopes the perpetrator can be caught and prosecuted to the full extent of the law.

Police Officer Erin Spilker tells KLIN News that police are investigating the vandalism as a hate crime. She says the dollar amount of damage doesn’t equal the amount of heartache or pain or fear that it instills in people in the Lincoln community.

Temple member and office administrator Peter Mullin tells KLIN News that they are very disappointed this would happen in Lincoln. He says that they are heartened by the outpouring of support they have already received by other churches and Lincoln residents.

Police continue looking for the individual that used orange paint to draw a swastika on the front steps of the temple and urge anyone with information to call police at 402-441-6000 or Lincoln Crimestoppers at 402-475-3600.