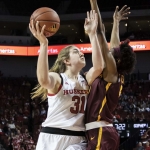 “We talked a little bit over the last couple days that early in the Big Ten season we were gonna have an opportunity to really test the character of our team to see how we would bounce back after a very disappointing road loss in overtime at Michigan State,” said coach Amy Williams. “I thought our kids really responded well. Minnesota is an incredibly good team.”

Another 10-0 run in the third quarter and hot shooting throughout the second half helped Nebraska extend the lead by as much as 15 before winning 72-58.

Kate Cain had a game highs with 19 points, 15 rebounds, and six blocked shots. Whitish and Sam Haiby both finished with 17 points.

“Kate was incredible tonight,” said Williams. “I thought she was the key. She really sparked us offensively and defensively.”

The Huskers shot 10-for-19 from three over the course of the game, with Whitish making five of those.

“We’ve talked to (Whitish) a lot about playing aggressively offensively and looking for her shot,” said Williams. “I think when she does that it gives everybody on the court and on our team a little peace of mind and a comfort.”

Nebraska is next in action hosting Wisconsin January 9..