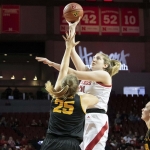 Some games require a single player taking over the game, while others need a team approach to overcome the opponent. Saturday was the latter for the Huskers.

“Once we started building off those runs, we just keep building off of them,” said Cain. “We started to build a little bit of momentum and tried to carry that through the game.”

The second quarter saw Nebraska hit four threes and utilize an 8-0 run to lead 38-34 at the half. Nine Huskers scored in the first half, with nobody having more than eight points.

“At halftime we were sitting there with five offensive rebounds but we knew that that helped us have a more effective second quarter,” said coach Amy Williams. “So I think our kids knew that that was the thought coming out is we need to be aggressive on the boards.”

Iowa cut the lead to just one in a three possession stretch in the third quarter that saw the Hawkeyes hit a pair of threes and the Huskers hit one themselves. That would be the closest the game would come as Nebraska wouldn’t give up the lead, but would never lead by more 10 the rest of the way.

A free throw shooting contest broke out in the final quarter, where defense was called much tighter than the rest of the game and the teams combined to shoot 32 free throws. Only 21 total free throws were attempted in the first three quarters.

“We’re really excited to start league play off with a win and protect our home court,” said Williams. “I felt like it was an incredible battle, two teams that were really going back and forth throwing punches and finding ways to adjust to the game. I’m really proud of the complete effort from top to bottom.”