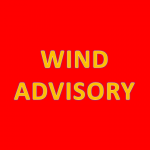 Northwest winds around 30 mph with gusts up to 50 mph will continue through portions of east central, northeast and southeast Nebraska until noon CST today.

Gusty winds could blow around unsecured objects. Tree limbs could be blown down and a few power outages may result. P