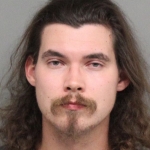 A trail of blood leads to a quick arrest in an early morning stabbing.

Officer Luke Bonkiwiecz says that a 52-year-old Lincoln man was discovered on the corner of 48th and O this morning suffering from multiple life-threatening stab wounds.  Officers followed a trail of blood to a nearby apartment, where they found 26-year-old Lawson Ballard covered in blood but not injured.

Officer Bonkiwiecz says that Ballard told them that he had hired the victim as a private investigator and became upset when he kept asking for more money. The victim suffers from life threatening injuries after being stabbed multiple times in his neck, chest and hands.

Ballard was cited and lodged for 1st degree assault and use of a weapon to commit a felony.