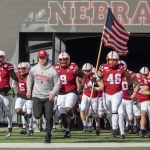 Nebraska(4-6, 2-5 Big Ten) took on one of the best defenses in the country Saturday, but costly mistakes leave the offensive output hallow.

Nebraska was forced to punt on the first possession, but got good field position for the second after junior linebacker JoJo Domann punched a ball from Wisconsin(8-2, 5-2 Big Ten) running back Jonathan Taylor. The ball took one of the strangest hops, but stayed in bounds to set Nebraska up near midfield.

How'd the ball not go out of bounds?

And how'd Jonathan Taylor catch it, in the first place?

Nebraska took advantage of the field position to score first. The Huskers would hold leads of 7-0 and 14-10, but Wisconsin ran off 24 unanswered while Nebraska threw an interception, had a turnover on downs in Badger territory, and missed a field goal before touching the scoreboard again in the fourth quarter.

“That’s a really good defense we played today, and we knew we weren’t going to get that many snaps,” said coach Scott Frost. “We got, the last I saw, was 60 snaps. We played well on offense. Came up a little short on a couple of fourth downs, made a couple mistakes. For the most part I thought those guys fought.”

Nebraska had the ball in the first quarter for nearly 11 of the 15 minutes, but would only have possession for about 14 of the final 45 minutes. That was in part due to the running game of Wisconsin that posted 320 yards, including 204 from Taylor. That was the third time Taylor has eclipsed the 200 yard mark against Nebraska.

Wisconsin would use that advantage to close out a 37-21 win.

Despite only scoring on three drives while crossing the Wisconsin 40-yard line eight times, the Huskers did find their stride offensively, putting up 493 total yards with 273 on the ground. Coming into the game, Wisconsin was giving up 231.4 total yards per game and only 84.4 yards on the ground.

A major contributor for Nebraska was junior Dedrick Mills. With freshman Wan’Dale Robinson out for the game, Mills took advantage of an expanded workload to the tune of 188 yards on 17 carries and one touchdown.

“We put him in some stuff that he was a little more comfortable with and he just got more chances today,” said Frost. “Also, a bunch of credit to the offensive line. I thought those guys probably had their best run-blocking game of the year.”

Sophomore quarterback Adrian Martinez added 123 yards and one touchdown on the ground. Through the air, Martinez was 13-23 for 220 yards, one interception, and a 23-yard touchdown pass to junior JD Spielman.

“I fought my tail off out there this weekend,” said Martinez. “I didn’t always make the perfect decision. I have a couple of bonehead plays, but I played my tail off and I was fighting for my teammates. It felt like I was getting back to myself out there.”

Also out for the game were seniors Darrion Daniels and Carlos Davis. That meant some new faces saw the field on defense, including freshman Ty Robinson and junior Keem Green.

“It was a good game by them and I didn’t even notice the difference between them and the starters,” said senior linebacker Mohammed Barry. “Of course Los [Carlos Davis] is a dominant player, not taking that away from him and Darrion [Daniels], but they did a good job filling in.”

Nebraska must now win the final two games on the schedule to gain bowl eligibility. That begins with a road match next week at Maryland(3-7, 1-6 Big Ten).

· With the loss, Nebraska dropped to 4-10 all-time against Wisconsin, including 3-3 in Lincoln. The Badgers have won the past seven meetings.

· Junior running back Dedrick Mills was just the second rusher to surpass 100 rushing yards in 2019 against a Badger defense allowing 84 rushing yards per game. He joined Ohio State’s JK Dobbins (163 yards) as players to top the century mark against Wisconsin this year.

· Junior receiver JD Spielman caught four passes for 71 yards and a touchdown in today’s game. Spielman extended his streak of consecutive games with a reception to 31, the fifth-longest in school history. Spielman has at least two catches in 30 of those 31 games.

· Senior linebacker Mohamed Barry had 12 tackles in the game to increase his career total to 237, moving him into the top 20 on the Nebraska career tackles list. Barry now ranks 18th and is one tackle shy of tying Wayne Meylan (238) for 17th on the all-time list.