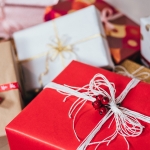 Christmas shopping in Nebraska is predicted to be reasonably good this year..but Creighton University Economist Ernie Goss tells KLIN News the outlook isn’t as jolly as they’d like partly because of international trade concerns with the president threatening a hard line toward the Chinese with tariffs.

Electronic items don’t appear to be the hot ticket Christmas gift items this year. He says that many have already purchased the items they want such as cell phones.

Professor Goss says gifting experiences appear to be at the top of Santa’s list. Those would include health club memberships and vacations providing competition to traditional gifts like new pajamas and scented candles.