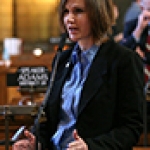 Bolz, a Democrat, kicked off her campaign Thursday for Nebraska’s 1st Congressional District. She faces an uphill battle against Fortenberry, who is serving his eighth term in Congress.

Bolz, of Lincoln, is pledging to improve access to health care and serve the interest of Nebraska farmers hurt by President Donald Trump’s trade war if elected. She also vows to fight pharmaceutical companies to lower the cost of prescription drugs.
The 1st Congressional District includes most of the eastern quarter of the state outside of Omaha and some its suburbs. The district leans Republican and includes Lincoln, Bellevue, Fremont and Norfolk.