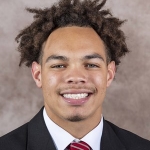 Walters declined to state why Hunt and Legrone, both redshirt freshmen, had been suspended, saying that the matter was going to be handled “in house.”

Hunt was one of the receiver candidates pushing for a starting spot during fall camp, but was not on Nebraska’s initial depth chart that was released on Monday. He played in two games as a true freshman last year. Hunt was a consensus three star recruit coming out of Paraclete High School in California.

Legrone appeared in three games last season. In his debut against Bethune-Cookman, Legrone caught a pass for an eight yard gain in the fourth quarter.

Walters added that despite the suspensions, he feels good about the overall depth on offense. “Everybody that was apart of our fall camp, they were getting reps,” Walters said. “We believe that you get better by taking reps, so I feel comfortable and confident that the guys behind, the guys that we have that are going to suit are going to be able to go out there and make plays.”

Additionally, Walters said that because they cross-train players in practice, players like Wan’Dale Robinson and J.D. Spielman can be moved around on offense and still be well suited and comfortable.

Nebraska’s season opener is set for Saturday against South Alabama. Coverage can be found on KLIN. Kick-off is at 11 a.m. but coverage on KLIN will start at 6 a.m.