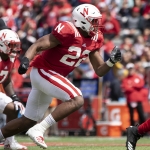 With fall camp finally in the books, the Nebraska football team have their season opener to prepare for. Husker fans won’t need to be reminded of the rocky start that NU got out to last season, but according to defensive coordinator Erik Chinander, the Blackshirts at the very least will be able to hit the ground running.

“It’s just a more mature group. It’s a more workmanlike group. It’s a group that knows what has to be done if we have to be successful,” Chinander said. “…To me, it’s a completely different attitude.”

The improved effort in practice is what Chinander attributes the turnaround to.