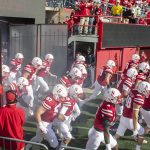 Another true freshman, Cam Jurgens, is the starting center, as head coach Scott Frost said would be the case on Friday. Redshirt freshman Will Farniok is the backup to Jurgens.

Jack Stoll and Austin Allen are listed as “OR” on the depth chart at first string tight end. That is also the case at running back, where both Dedrick Mills and Maurice Washington are split first string backs. Washington is facing two charges, including a felony, back in his home state of California. Frost has declined to state whether he will start Washington or not against South Alabama.

Additionally, Nebraska native Wyatt Mazour and Oradell, New Jersey product Rahmir Johnson are both listed as backups, who were given the “OR” designation as well.

At QB, Noah Vedral is listed as the number two quarterback while true freshman Luke McCaffrey is at third string.

Caleb Tannor and JoJo Domann are both listed as first string outside linebackers on one end, while Alex Davis has the other outside backer spot locked up as the first string there. Behind Davis, are Tyrin Ferguson and true freshman Garrett Nelson, who are listed as split second string.

Redshirt freshman and Gretna native Joseph Johnson is backup to Mohamed Barry at inside linebacker. Collin Miller and Will Honas are both listed at first string at the other inside backer spot.

In the secondary, Marquel Dismuke and Deontai Williams will be the starting safeties, with redshirt freshman walk-on Isaiah Stallbird and Eric Lee listed as backups behind them, respectively. At corner, Dicaprio Bootle is a starter, ahead of Braxton Clark and Quinton Newsome, while on the other side, Lamar Jackson and Cam Taylor are the first strings.

At special teams, Spielman will return punts. Lincoln native Isaac Armstrong has held onto his spot as first string punter. Armstrong replaced Caleb Lightbourn last season as the starting punter during NU’s game against No. 16 Wisconsin on October 6th. Chase Urbach will again be the long snapper. Both Washington and Robinson will be the kick returners.