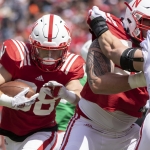 “I kind of thought Trent might be the first guy, but he’s really the first one I hope in a long line of walk-ons while I’m here that comes in, goes to work, and becomes a guy that will play or start for us,” Frost said.

In other news and notes: