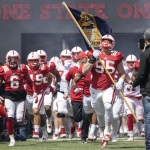 Wednesday morning marked the final session of fall camp for Nebraska. Now, the Huskers are looking to get into game week prep with their season opener coming up on August 31st.

“Now, the focus shifts to getting a jump start on South Alabama, understanding their tendencies and what they’re going to see defensively,” offensive coordinator Troy Walters told reporters on Wednesday. “…We’re trying to simulate game day atmosphere (and) game day situations, so the guys have to be focused (and) dialed in. The extra days of going against South Alabama will help us next Saturday.”

There are still some questions surrounding the final depth chart, however Walters said he plans on playing lots of players, especially at wide receiver.

“You’d like to be at least two deeps, so that gives you six,” Walters said. “…One of the focuses this season is playing fast and selling out so I don’t want guys to hold things in and be on cruise control because they’re tired. They don’t want to get tired. We want guys to go full speed and when you get tired we’ll sub and get some other guys in and we feel like we have some depth where we can get guys in and play just as fast. We’d like to play six, seven, maybe eight.”

Walters added that wide receivers Mike Williams and Jaevon McQuitty have had good camps. Williams, a senior, started two games last season while McQuitty, a redshirt sophomore, appeared in 6 games but did not have a reception.