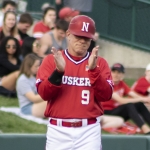 “After a nationwide search that yielded several top candidates, I felt that the right coach and the right fit for the Aggie baseball program was Mike [Kirby],” said New Mexico State Athletic Director Mario Moccia in a press release. “Mike is an extremely passionate individual who I know will do everything in his power to keep our program successful, take it to new heights and excite our community.”

Prior to joining former Nebraska head coach Darin Erstad’s staff, Kirby spent three seasons at Cal State Fullerton, where he served as the Titan’s recruiting coordinator and first base coach. It was his second stint with Cal State, having previously been an assistant with the Titans in the 1990s before taking a job with Los Angeles City College in 1996.

“Mike is the ultimate baseball guy,” Erstad said in a press release. “With his experience and knowledge of the game, he couldn’t be a better fit at New Mexico State. The thing that I have been impressed over the last five years working with him is that he cares more about the student-athletes as a person than the baseball side of things. His abilities to communicate with the kids; I was just in awe of how he did that and learned so much from him. I couldn’t be happier for him. Terrific hire!”

Last season, the Aggies finished 38-17 overall. New Mexico State were scheduled to play Nebraska for a three game series at Haymarket Park in March, but it was cancelled due to weather. Kirby is the replacement for Brian Green, who departed to become the head coach at Washington State.

For now, only one of Erstad’s former assistants remains on staff – volunteer assistant coach Curtis Ledbetter. As a volunteer, Ledbetter does not receive financial compensation for his work with the team. Ledbetter, who played for the Huskers from 2003-2005, spent a decade as the team’s director of operations before taking on the volunteer role in the fall of 2018. Ledbetter was both the hitting and first base coach for Nebraska this past season.