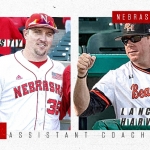 Nebraska Baseball Head Coach Will Bolt announced the addition of Jeff Christy and Lance Harvell to his coaching staff on Wednesday. Christy will serve as the pitching coach for the Huskers, while Harvell will be the hitting coach and recruiting coordinator.

“I am excited to bring Jeff and his family back home to Lincoln,” Bolt said. “I’ve been able to coach with Jeff for five seasons and have seen first-hand his knowledge and passion for the game and recruiting. His experiences as a player and coach will allow him to excel in handling a pitching staff and developing pitchers here at Nebraska.”

Christy spent the last two seasons as a volunteer assistant coach at Texas A&M under former NU assistant Rob Childress. The Aggies qualified for NCAA Regionals during both seasons, winning 40 games in 2018 and 39 games in 2019.

Before his time in College Station, Christy spent two years as an assistant coach at Central Oklahoma and helped the Bronchos to a 67-43-1 record during that span. In 2017, Central Oklahoma went 37-21-1 and advanced to the NCAA Division II Central Regional final after taking runner-up honors at the Mid-America Intercollegiate Athletics Association conference tournament.

Christy served as a volunteer assistant at Nebraska from 2012 to 2015 on Darin Erstad’s staff. The Huskers qualified for the NCAA Tournament in 2014, the team’s first appearance since 2008. NU took runner-up honors in the Big Ten in 2013 and 2014, and qualified for the conference tournament during all four years when Christy was on staff. The Huskers made it to the championship game of the Big Ten Tournament in 2013 and 2014.

Christy spent the 2011 season as a volunteer assistant at Wichita State. The Shockers went 39-26 overall and made it to the championship game of the Missouri Valley Tournament.

During his playing days, Christy was drafted by the Minnesota Twins in the sixth round of the 2006 MLB Draft. He reached Triple-A in 2008 and 2009, playing for the Rochester Red Wings. Christy spent the 2010 season with the Wichita Wingnuts of the American Association and was named an All-Star.

A two-year letterwinner for the Huskers, Christy caught a school-record 64 games as a junior in 2005 to help NU earn a spot in the College World Series and win a school-record 57 games. In 2006, he earned honorable-mention All-Big 12 honors and helped NU to 42 wins and a No. 6 national seed. Prior to his Husker career, Christy played at Barton County Community College and was a first-team All-Jayhawk League selection in 2004 and an honorable-mention pick in 2003.

Christy earned his bachelor’s degree from Nebraska in December 2008. He and his wife, Michelle, were married in 2007 and have three children, Quinn, Griffin and Stella.

“I am extremely excited to be coming back to Nebraska,” Christy said. “This University holds a special place in my heart and can’t thank Coach Bolt and the University enough for this opportunity. I am ready to get to work and excited to meet the players.”

“I feel very fortunate that Lance and his family have joined us in Lincoln,” Bolt said. “Lance brings a wealth of experience and excellence both on the coaching and recruiting side of the game and will be a tremendous asset to our staff. He has coached and recruited some of the best offenses in the nation and I look forward to seeing his continued success for the Huskers.”

During Harvell’s time at Sam Houston State, the Bearkats captured four Southland Conference regular-season titles and qualified for the NCAA Tournament in 2016 and 2017. Harvell established himself as the top recruiting coordinator in the Southland Conference by D1Baseball.com in 2016.

Sam Houston State enjoyed a Division I program-record 44-win season in 2017 to advance to its first-ever NCAA Super Regional. The Bearkats stormed through the Southland Conference Tournament with four consecutive wins to capture the crown and earn an automatic berth to the NCAA Tournament. In the Lubbock Regional, the team knocked off No. 5 Texas Tech twice and won both of its games against 16th-ranked Arizona to earn a spot in the Tallahassee Super Regional.

In 2016, the Bearkats swept the Southland regular-season and tournament titles to earn a spot in the NCAA Tournament. Sam Houston State went 42-22 overall and posted a 24-6 mark in conference play.

Harvell spent two years as the volunteer assistant at Louisiana in 2013 and 2014. Harvell helped guide the Ragin’ Cajuns to national prominence and the best offense in the country two straight years. The 2014 team finished the season with a 58-10 record, the third-best record in NCAA history, and the best record and most wins in school and Sun Belt Conference history. At the end of the regular season, the Cajuns were the consensus No. 1 team by every poll, earned the No. 6 national seed and led the nation with three first-team All-Americans. The Cajuns offense finished in the top three nationally in 26 of the 29 offensive categories.

Harvell spent three years at Texarkana College, including two under Bolt, as an assistant coach and recruiting coordinator from 2010 to 2012. In his time at Texarkana, the Bulldogs produced some of the best offenses in their conference and region in terms of production, leading the conference in batting in 2011 and 2012.

Harvell spent the 2008 and 2009 seasons as a graduate assistant coach at Texas A&M. During the 2009 season he was the team’s strength and conditioning coach. In 2008, he served as the pitching assistant, helping the Aggies to a Big 12 regular-season crown, NCAA Regional title and an NCAA Super Regional berth.

During his playing days, Harvell walked on at Texas A&M in 2005 and 2006 after leading Richland Community College to back-to-back NJCAA national titles in 2003 and 2004.

Harvell earned his bachelor’s degree from Texas A&M in 2006 and his master’s degree in 2009. He and his wife, Courtney, have one son, Bodie.

“This is such a great opportunity for me and my family,” Harvell said. “The University of Nebraska has such a proud baseball tradition and I feel very blessed to be able to be a part of that. Coach Bolt and Coach Christy, having played and coached here, have blood, sweat and tears invested into this program. Their passion for Nebraska baseball is contagious and our expectations are high. I’m excited to hit the ground running and get to work with them and our players.”