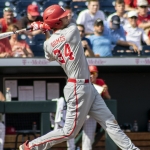 Gomes played both first base and was a closer in 2019, but was recognized on the first team solely for his work as a reliever.

In 19 appearances, the 6-foot-5, 225 pound player from Millard West High School recorded 13 saves. Also, he struck out 19 batters in 22 innings pitched on the season.

Gomes’ only blown save in the season came against Oklahoma State in the Oklahoma City Regional which saw the Cowboys hit a three run shot to take the lead in the ninth inning. The Huskers fell to UConn the very next day in an elimination game, 16-1 that ended the season. A little over 24 hours following the end of the season, NU head coach Darin Erstad resigned after eight seasons.