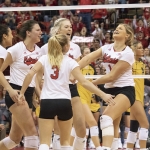 The elevation at Mount Everest is 29,029 feet.  Although it may seem to be an arbitrary bit of trivia, it’s what will be driving the Husker volleyball team in 2019, who very nearly reached the peak of college volleyball last season.

Nebraska just missed out on the mountaintop after they fell to Stanford in five sets in the national championship match back in December.  Now, as they prepare for their two and a half week visit to Asia, the Huskers will be using the pain of their title game loss to motivate them.

“This team has got a burning fire in them,” Cook said. “I’ve seen it all spring. I’ve seen it workouts and I saw it during beach (season) and I’m seeing it now in our training for Asia.”

Nebraska has made the trip to Asia three times; in 2006, 2010 and 2014. The team will depart on June 15 and return to Lincoln on July 2. While there, the Huskers will travel around both Japan and China to take on Chinese and Japanese professional volleyball teams, in addition to sightseeing.

It’ll prove to be invaluable experience for NU’s young squad, who do not have a single senior on the roster, after graduating Mikaela Foecke, Kenzie Maloney and Brooke Smith, while also adding six new players.

“This group is going to be together for two years, so we’re going to push the envelope a little bit,” Cook said. “Maybe we’ll try some things that we’ve seen the men do and what they’re doing internationally.”

All of the freshmen will be on the trip with the exception of Nicole Drewnick, who recently reclassified into the class of 2019 so she could play this fall. The 6-foot-2 setter from Carrollton, Texas will backup sophomore setter Nicklin Hames.

“We like this group,” Cook said. “They have a great chemistry… There’s a bond with this group and a connection.”

Nebraska’s season will open against Creighton on Friday, August 30 at the Bob Devaney Sports Center. Coverage of Husker volleyball can be found on B 107.3.