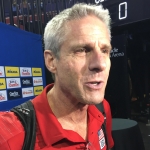 Although Team USA’s three match home stand in Lincoln during the FIVB Volleyball Nation’s League Tournament was marred by a four set loss to No. 4 Brazil on Thursday, their time spent playing in Lincoln was a fansastic experience for the team, according to Team USA head coach Karch Kiraly.

“We love playing here. Nebraska is such a great volleyball state and Nebraska fans are so knowledgeable and passionate, “ Kiraly said, following his squad’s loss to Brazil on Thursday. “We’re honored to be able to compete here for the second year in a row at Nations League. Who knows, maybe we’ll make it a habit and come back again next year.”

It’s not hard to see why Kiraly was so effusive in his praise of the fans, who showed up in droves to Pinnacle Bank Arena to watch Thursday night’s match. Jeff Maul of the Lincoln Convention and Visitors Bureau told Jack Mitchell on LNK Today that there were over 8,000 tickets sold for the match.  “It looked full,” Maul said. “There was a lot of great energy.”

Team USA played three matches in Lincoln in the tournament. On Tuesday, the U.S. defeated Korea in four sets and on Wednesday, they swept Germany. Maul noted that the ticket sales saw increases each day, a good sign that Team USA could return to Lincoln soon.

“We will definitely be sitting down with those folks to negotiate next year’s contract,” Maul said.

The fact that three former Huskers were on the roster for Team USA – Mikaela Foecke, Jordan Larson and Kelsey Robinson – likely played a large part in the ticket sales. All three made a tremendous effort to reach out and interact with fans after each match, signing autographs and pictures with anyone who asked.

With a crowd hungry to see former Huskers in action, it’s no wonder that Team USA wants to make a concerted effort to return to Lincoln.

“If we’re successful in early August for qualifying for the Olympics, then that would be really fun to come here in the lead up to the Tokyo Olympics,” Kiraly said.

Next up for Team USA, is a trip to China for week number four of the competition. The team, now 7-2 in the tournament, departed for the trip Friday morning.