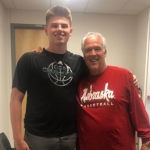 Bret Porter, a 6-foot-6, 210 pound guard/forward from Millard North High School in Omaha, announced Thursday afternoon that he will be walking-on with the Nebraska basketball team.

He’s the third walk-on to join the basketball program since Fred Hoiberg was hired in late March. With the addition of Porter, there are now four players from the state of Nebraska on the roster.

Blessed and excited to announce that I will be continuing my academic and basketball career at the University of Nebraska next year as a preferred walk on. Grateful for the opportunity from Coach Hoiberg and Coach Sadler and I can’t wait to get to work! 🌽🔴 #gbr pic.twitter.com/ZboFCGPkV2