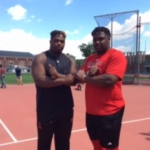 On Friday, Twin brothers Carlos and Khalil Davis will compete in discus at the NCAA Outdoor Championships in Austin, Texas. They, along with 17 other Nebraska track and field athletes, will be competing in the event.

It’ll be Carlos’ fourth time at the Outdoor Championships but it will be Khalil’s first. Carlos told reporters last week that although Khalil still has yet to compete on that big of a stage in discus, he’s already proven his mettle simply by qualifying.

“I just told him the hardest part is getting to nationals,” Carlos said. “Regionals is no joke. You only get three throws and you have to get your best one.”

Carlos finished third at the Big 10 Championships this season with a throw of 183-3 (55.87 meters). Also, he finished fourth in the NCAA west preliminary round with a toss of 191-11 (58.5 meters), ninth best in program history.

The twin brothers are two sport stars at NU, splitting their time between football and track. It’s a time consuming schedule that doesn’t afford them much leisure time. However, the inseparable brothers share their love for the same outdoor activity they’ve always used to unwind – fishing.

“We don’t really get a break, but we do go fishing,” Carlos said. Carlos and Khalil said they’ve enjoyed catching fish ever since their grandmother used to take them out when they were small children.

Between discuss, football and fishing, the twins have their hands full. It’s a demanding regime for any student-athlete, but they have the support of NU football head coach Scott Frost and maybe more importantly in their eyes, the support of the defensive line.

“We get a lot of support from the D-line. They want us to get that First Team All-American status,” Carlos said. The entire unit went out to watch Carlos and Khalil practice their throws in preparation for the championships last week.

The whole defensive line, like the twins, share an unbreakable bond. However currently, football isn’t the focus for the Davis’s. They first have to prove themselves in the NCAA Outdoor Championships. That doesn’t mean that they won’t be enjoying themselves, though.

“Now, we can just enjoy the trip, enjoy the scenery and just throw big.”