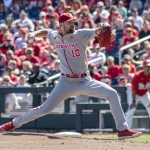 Nebraska baseball starting pitcher Matt Waldron was selected by the Cleveland Indians in the 18th round as the 550th overall selection of the MLB Draft.

Waldron is a native of Omaha, Nebraska. He played high school baseball at Westside. He has a twin brother, Mike, who also just concluded his career at NU as a pitcher.