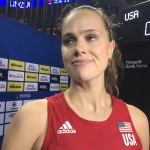 Team USA improved to 7-1 at the FIVB VNL Tournament Wednesday night at Pinnacle Bank Arena after sweeping Germany. Things ran a little smoother for Team USA for their second match in Lincoln, after needing an extra set to put away Korea in their last match.

It was fitting that a nearly perfect performance from Team USA got a picture perfect ending, as former Husker Kelsey Robinson scored the game winner in her 2019 Team USA debut, sending the Nebraska fans in attendance home with a smile on their face. But the joy was all Robinson’s, she told reporters following the match.

“It’s always a blast to play in front of Nebraska fans and they love volleyball, so it’s a treat for Jordan (Larson), (Mikaela) Foecke and me to come home and be in front of a home crowd.”

Robinson, who started the match after not playing at all on Tuesday, provided an immediate spark for Team USA, totaling four kills and two blocks in the first set. Her teammate and fellow former Husker, Mikaela Foecke, was also excellent in the first set, tallying five kills in the 25-18 set one win.

Set two was a little shakier for Team USA, having to come back after getting down 18-16, but they were able to rally back to take the set, 25-22. USA won set three by the same margin they won set one, 25-18, to secure the sweep.

Robinson was fantastic on the night. She had 11 kills, four blocks and three aces, playing with a relentless energy all evening, something that she said she always tries to bring in each match.

“I think every time I get to be on the court it’s kind of that same energy just because I feel like I don’t know when I’ll get that opportunity again so I try and enjoy it when I have that chance,” Robinson said.

Foecke was also excellent, who finished with a team high 13 kills. According to Foecke, she, along with the rest of the team, played much better on Wednesday than on Tuesday simply because they knew what to expect in their second match.

“We had a lot more confidence. We knew what the crowd was going to be like, what we needed to play and knowing that obviously, no team is going to roll over for us. Every team gives Team USA their best shot, so we needed to come out, ready to grind and play hard.”

Team USA head coach Karch Kiraly, though pleased with his team’s performance for the most part, wasn’t wholly satisfied, citing the fact that Germany weren’t playing their best players.

Team USA will be back in action Thursday night against Brazil. First serve is set for 7:30. Television coverage of it can be found on NBCSN.