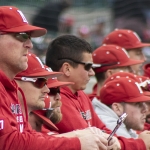 Darin Erstad took his keys out of his pocket and locked the doors to the baseball office for the last time Monday evening. Sporting a grey Nebraska baseball t-shirt, red athletic shorts and his trademark shades, Erstad slowly made his way over to the small contingent of reporters gathered outside his office at Haymarket Park. He looked tired – worn down, even. That’s what nearly a quarter of a century in baseball will do to you.

“I’m just ready to take a deep breath and smile again,” Erstad said hours after the school announced he had resigned as head coach of the Nebraska baseball team, calling it quits from the school that Erstad first rose to prominence at more than two decades ago.

Erstad was a two sport star at Nebraska on both the baseball and football teams, where he helped win a national championship as a punter on the football team in 1994. Following his time with the Huskers, Erstad was selected as the No. 1 overall pick in the 1995 MLB Draft. He played in the majors for over a dozen years, where won three Gold Gloves, made the All-Star team twice and won a World Series.

After his career as a major leaguer, Erstad became a volunteer coach on the Nebraska baseball team in 2010. Then on June 2, 2011, Erstad was promoted to head coach by then-athletic director Tom Osborne, who had just relieved Mike Anderson of head coaching duties.

However after eight years, four NCAA Tournament appearances and one Big 10 title, Erstad decided to walk away, citing his desire to spend more time with his family.

“I just know how important it was for me to have my parents there all the time at games (and) at practices,” Erstad said. “It’s meant a lot to me and I want to be able to do that for my kids as well.”

Erstad’s resignation was a shock to everyone; to fans, to the media and even his own players. It wasn’t a snap decision either, as Erstad confirmed Monday evening that he had been thinking about resigning for a “couple years.”

Junior reliever Robbie Palkert said that nearly the entire team tried and failed to hold back tears when Erstad broke the news to them. Although devastated, Palkert said he understood why Erstad felt the need to step down. “We’re so happy for coach. He made a decision for him and his family and we all respect the hell out of him for that.”

It can’t be understated though, just how significant of a loss Erstad’s resignation is not just for the program, but for the players, who always viewed Erstad as more of a mentor than simply a coach.

“I’ll never forget, when I was a freshman, as a young pup, I walked into his office the day after my grandmother passed away,” Palkert said. “I had tears falling out of my eyes. He was a father to me and he still is and he will be for however many years I’m on this earth.”

Erstad said he won’t be going far though, expressing his desire to stay in Lincoln. “Unless they kick me out of the state, this is where we want to raise our kids,” Erstad said.

Although he’s not a Nebraska native, Nebraska has always been home for Erstad. During his introductory press conference back in 2011, Erstad reminisced about the way Osborne courted him to the football team and how much it meant to him that he was hand picked by that same man to take over as head coach of the Nebraska baseball team. However, Erstad didn’t feel that it was the culmination of his legacy at NU, expressing on that there was just one thing missing from the storybook-like string of events.

“I think winning a CWS Championship would be a nice way to finish that story,” Erstad said at the time. He didn’t get his happily ever after, though. Few ever do. Instead, Erstad’s coaching career ended on a Sunday afternoon in the Oklahoma City Regional, where he saw his team get shelled 16 to 1 by UConn.

The sun was setting by the time Erstad left Haymarket Park Monday evening, bringing his final chapter to a close at NU. His next chapter is only beginning and it’ll likely be a lot quieter, but that’s exactly how he would want it.