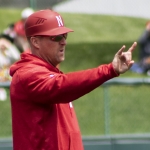 The Nebraska athletic department announced Monday afternoon that NU baseball head coach Darin Erstad has resigned after 8 seasons. During his tenure, Erstad helped guide the Huskers to a Big Ten Championship and four appearances to an NCAA Tournament Regional.

I have made the extremely difficult decision to step away from coaching,” Erstad said in a press release. “I love this team. I love our staff and I love Nebraska. The bottom line is I do not want to miss seeing our kids grow up. I want to thank our administration and academic staff for all of their support over the last eight years. GBR forever.”

NU Athletic Director Bill Moos said in a statement that he understood Erstad’s decision to step away.

“Darin earned the right to lead this baseball program well into the future, and I was hopeful that would be the case,” Moos said. “Darin loved the opportunity to represent Nebraska every day and did an outstanding job. He’s a Nebraska guy who loves this program and is a proven winner. With all that said, I respect and admire that Darin’s priority now is to spend more time with his family as his children grow up.”

Erstad had been head coach since 2011, taking the reins for Nebraska’s first season in the Big 10 conference. He finished with an overall record of 267-193-1. In 2017, Nebraska won the Big 10 regular season title under Erstad. Erstad’s teams made the Big 10 Tournament conference championship game three times, in 2013, 2014 and just this past season in 2019, but finished as runner up each time.

The Jamestown, North Dakota, native played on both the Nebraska football and baseball teams. He was the starting punter on the Husker’s 1994 national championship team. Also, he was the number one overall pick in the MLB Draft in 1995, spending the majority of his playing career with the Angels, where he won three Gold Gloves.