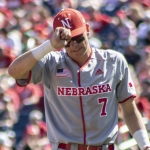 Sunday afternoon, the UConn Huskies found 16 runs on 22 hits in a comfortable 16-1 victory against a shell shocked Husker team still reeling from their ninth inning collapse to Oklahoma State on Saturday. Senior infielder Angelo Altavilla’s RBI single to left center in the bottom of the fourth was the only run Nebraska could muster on the afternoon.

The loss put an end to Nebraska’s 2019 campaign. The Huskers finished the season 32-24 overall. Although their season ended in disarray, Nebraska enjoyed plenty of success, considering the Big Red was picked to finish sixth in the Big 10 prior to the season.

The Huskers won their first NCAA Tournament game since 2014. Also, they made the Big 10 Tournament title game and won massive games against top opponents such as Texas Tech, Baylor and Arizona State. However, Nebraska’s season still ended on a low point at Bricktown Ballpark Sunday afternoon, less than 24 hours after NU nearly pulled off the upset against the Oklahoma State Cowboys that would’ve sent them through to a regional final for the first time since 2007.

Despite the bitter way it all ended for NU in 2019, the Huskers will return a lot of freshman talent for 2020, including Spencer Schwellenbach, Colby Gomes and Schay Schanaman.

However, 10 seniors will now need to move on, as their eligibility has been exhausted. Besides Alatavilla, there are plenty of key players that saw their college baseball careers end Sunday afternoon, including the entirety of the starting pitching rotation; Matt Waldron, Nate Fisher and Reece Eddins. Senior infielder Alex Henwood and catcher Luke Roskam also played major roles this season for NU. Additionally, senior reliever Mike Waldron, brother of Matt Waldron, has seen his time at Nebraska end as well.