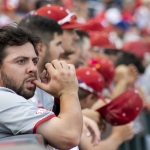 Oklahoma City, Okla. – Leading 5-2 after eight innings, Nebraska (32-23) allowed four runs in the top of the ninth as No. 9 Oklahoma State escaped with a 6-5 win in NCAA Regional action at Chickasaw Bricktown Ballpark on Saturday night. Trevor Boone hit the go-ahead three-run home run for the Cowboys.

Senior right-handed pitcher Matt Waldron, making his 14th start of the season, recorded a career-high 11 strikeouts in 7.2 innings and allowed two runs. It marked the first time a Husker pitcher had more than 10 strikeouts in a game since 2010 when Michael Mariot had 12 against Southeast Missouri State. Shay Schanaman and Colby Gomes each came on for relief appearances for the Big Red.

In the opening frame, Oklahoma State left the bases loaded without scoring. The first two batters each singled before a one-out error loaded the bases. Waldron got out of the jam with a strikeout and flyout. Nebraska plated three runs in the bottom of the first, as each of the first five batters reached base. Jaxon Hallmark and Cam Chick delivered back-to-back base hits before Aaron Palensky crushed a home run to left field. Spencer Schwellenbach was hit-by-pitch and advanced to second on Angelo Altavilla’s single. They made it to second and third on a double steal, but three consecutive outs left them stranded.

The Cowboys managed two baserunners in the top of the second, but left both on base in a scoreless frame. Hallmark hit a one-out single before Chick walked in the bottom of the second, but both runners were left stranded as the score remained 3-0.

Waldron struck out the side on 11 pitches in the top of the third. NU added two runs in the bottom of the third to take a 5-0 lead. Altavilla drew a leadoff walk before Gunner Hellstrom singled. They each advanced a base via wild pitch before Gomes drove them both in with a two-RBI single.

Waldron added two strikeouts in a scoreless top of the fourth, as the Cowboys managed one hit in the inning. OSU’s pitcher struck out the side in the bottom of the fourth.

The Huskers held the Cowboys scoreless in the top of the fifth despite a runner getting to third base. Altavilla made a catch in the stands on a foul-out for the second out before Acker’s diving catch to end the inning. NU went down in order in the bottom of the fifth.

In the top of the sixth, Carson McCusker hit a solo home run for Oklahoma State’s first run of the game. It cut the Husker lead to 5-1. The Huskers were retired in order in the bottom of the sixth.

Oklahoma State scored one run on three hits in the top of the eighth, but left two runners stranded. It cut the deficit to 5-2. In the bottom of the eighth, Hellstrom managed a single, but was left on base.

In the top of the ninth, the Cowboys scored four runs to take their first lead of the game. OSU put two runners on with one out before a flyout advanced the lead runner to third. An RBI single put one run on the board before Boone’s three-run shot to left field. The Huskers went down in order in the bottom of the ninth.

The Huskers face UConn in an elimination game on Sunday at noon (CT). The winner advances to play No. 9 Oklahoma State on Sunday at 5 p.m.