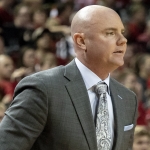 Former NU assistant basketball coach Michael Lewis has joined Mick Cronin’s coaching staff at UCLA, the school announced on Thursday. He had been an assistant under Tim Miles from 2016 until Miles was relieved of head coaching duties back in March.

“Michael Lewis is a tremendous basketball coach who has worked with three great coaches, in Brad Stevens, Chris Holtmann and Tim Miles,” Cronin said in a press release. “He’s someone I have known and respected for many years. He brings experience as a great offensive coach. Darren, Rod and now Michael make up a dynamic, experienced and hard-working coaching staff to help us build UCLA basketball back into a championship-caliber program.”

The three assistants that were on Miles’ staff when he was fired have all found landing spots now that Lewis is with the Bruins. Armon Gates was retained by current Nebraska head coach Fred Hoiberg and Jim Molinari joined Oklahoma’s coaching staff in April.