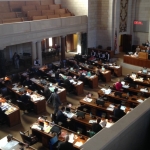 A  very strong division is being expressed on whether Nebraska lawmakers should advance a proposal offering business tax incentives.

But Nebraska Chamber of Commerce Executive Vice President for Legislation and Policy Kristen Hassebrook tells KLIN News that it is very important for the proposal to be passed this session. Hassebrook says the business tax incentive proposal is critical for maintaining a competitive business environment in Nebraska.

Hassebrook says they want to send out a message that Nebraska is open for business.
—