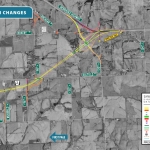 Lincoln is getting its long-awaited wish for an accelerated South Beltway.

Sponsor Lincoln State Senator Mike Hilgers tells KLIN News it will have a major impact on the whole city.

The four-lane expressway would link U.S. 77 and Nebraska Highway 2. The beltway’s main goal is to divert truck traffic that now travels off Highway 2 through Lincoln.

The proposal is expected to be signed by Governor Ricketts.