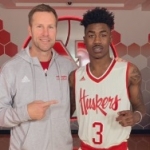 Salt Lake Community College point guard Cameron Mack announced on his Twitter account Saturday night that he had committed to play basketball at NU. He’ll be immediately eligible to play in 2019.

He had originally committed to St. John’s but lost interest after the coaching shakeup at the Red Storm that saw assistant Matt Abdelmassih leave to join Fred Hoiberg’s staff at Nebraska.

This past season, the 6-foot-2 College Station, Texas native averaged 19.1 points, 7.5 assists and 5.9 rebounds per game. Mack led Salt Lake to a 20-9 overall record, leading the team in points, assists, blocks and steals. According to jucorecruiting.com, Mack is the third best JUCO recruit in the nation.

Mack’s commitment comes of the heels of his visit to Lincoln this weekend. He was one of five visitors that made the trip. He’s the second player to commit to NU this weekend, along with Seattle University grad transfer Matej Kavas

Blessed to be signed to @HuskerHoops @CoachHoiberg #GBR #Showtime pic.twitter.com/Bh6a3rtilT