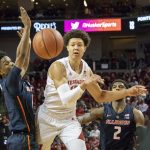 Coming up short in Big 10 road games is in danger of becoming a theme for Nebraska. Against Minnesota, the Huskers let a 13 point second half lead slip away from them. Against Maryland, Nebraska gave up the go ahead basket with less than four seconds left on the game clock.

The loss to the Terrapins was especially cruel to the Huskers. Thomas Allen tried to find Isaiah Roby at the basket with a last second lob pass in the game’s final seconds, however, it came in just a bit too low, and was swatted down to the hardwood as the final buzzer sounded. On the flight home, Roby couldn’t sleep.

“We’re all mad about it,” Roby said. “When you lose a game you know you should win, it hurts even more.” This wasn’t simply another loss for the team. It cut deeper than that.

“I think (the) coaches have more of a sense of urgency after this one,” Roby said. “We just feel that we aren’t playing up to our standards as a team.”

It’s obvious the team is frustrated and wants to be playing better, but for head coach Tim Miles, being disappointed isn’t enough. “How you put that disappointment into action is the important part, like (having) better defense and better rebounding.”

Roby is in complete agreement with his head coach. “We’re just not playing aggressive enough defensively. We’re kind of relaxing off the ball. We’re not playing five as one.”

Nebraska will need to be locked in defensively too, as Iowa shoots a not too shabby 47% from the floor. They’re also second in the conference in scoring, at 82.2 points per game. Getting to the foul line is another one of their strengths as well, as they score an average of 22 points per contest at the line.

The Huskers are an experienced unit, but the Hawkeyes have them beat in that regard. They’re returning all five starters from last season. The most dangerous of those returning starters is Tyler Cook. The junior forward leads the team in scoring and rebounds per game, at 17.6 points and 8.4 rebounds a night.

“He’s a beast,” Roby said. “You have to make sure you (don’t) let him have the ball right where he wants it.”

Just like Nebraska, Iowa is 11-3 and coming off a Thursday night conference road loss. The Hawkeyes are still without a win in the Big 10, after having already lost to Purdue, Michigan State, and Wisconsin.

With Sunday’s matchup being a road game, Miles hasn’t lost any faith in his players after their last couple of road performances. “I believe in our guys,” Miles said. “I think our guys are going to perform well, but it’s going to be a very difficult environment.”

The Huskers, ranked No. 24 in the AP and 13th in the NET (Iowa is 25th and 38th respectively in those rankings), will enter the game as slight favorites. However, with Sunday’s matchup being a road game for Nebraska, the psychological edge could be with Iowa. Matters also aren’t helped for the Huskers considering that the Hawkeyes are 8-1 at home.

Win or lose, Miles and Nebraska won’t be dwelling on what happens Sunday. They’ll need to move on regardless. “Don’t major in history,” Miles said. “They’re all dead.”