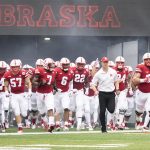 Wandale Robinson, the nation’s No. 2 all-purpose back has flipped his commitment from Kentucky to Nebraska. The Western Hills, Kentucky standout was named Mr. Football on Sunday for the Bluegrass state. Robinson originally had committed to the Wildcats in November, however Robinson couldn’t quite get Nebraska out of his mind, revealing in a tweet on Wednesday that he was “following my heart” when he made the choice to commit to Nebraska.

Running backs coach Ryan Held and offensive coordinator Troy Walters never gave up  on trying to land a commitment from the four star recruit, even weeks after he had announced he was sticking in the state of Kentucky from his high school gymnasium.

This season, Robinson garnered 1,973 yards on the ground and scored 30 rushing touchdowns. He also had 31 receptions for 725 yards and 11 touchdowns through the air.