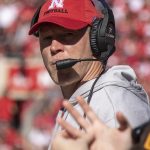 Nebraska came up short in Columbus, losing to the Ohio State Buckeyes 36-31. To lose five points to a top 10 opponent that has blown out the Huskers by a combined 101 points the past two seasons is nothing to be ashamed of, yet the loss will sting for this team and this coaching staff.

“We had every chance in the world to win that game,” Nebraska head coach Scott Frost said after the game. It’s a familiar refrain from Frost, for a team that is no stranger to agonizing defeat.

“The great thing coming out of the locker room is [that] our guys are upset,” Frost said. “They’re mad they didn’t win the football game… because they came here expecting to win.”

Despite the loss, the competitive nature of the game is a definitive sign that Nebraska has made progress. The last time Nebraska played a top 10 team, they were embarrassed by the Michigan Wolverines 56-10. Nebraska trailed that game 39 to nothing at halftime. A little over a month later, Nebraska has grown into a team that can scare Ohio State, as they led the Buckeyes 21-16 in the Horseshoe.

“I just don’t think the third quarter went very well for us,” Frost said. “We had some runs in the fourth quarter but by then, we were in a kind of ‘hurry up and try to go score’ mode.”

The special teams play was nothing short of a disaster, which has been a reoccurring theme for the Huskers this season. After Nebraska marched down the field in impressive fashion in their first drive that ended in a touchdown, the Huskers second series was less successful, to put it mildly. Isaac Armstrong’s punt was blocked into the end zone which resulted in a safety. Armstrong averaged a measly 38.6 yards per punt on seven attempts.

Not to be outdone, Caleb Lightbourn had a misfire of an onside kick which sent the football backwards. The kick went viral, making the rounds on social media pages nationwide.

Lightbourn’s laughable kick may have been out shadowed though, by Adrian Martinez’s decision in the second quarter to chuck the ball backwards in the red zone, resulting in a fumble.

Despite all of that, it was a close game. Although he had two touchdown passes, Dwayne Haskins looked average, going 18-32 and throwing an interception. Buckeyes running back J.K. Dobbins was the real threat. Dobbins slashed up Nebraska’s defense for 163 yards and three touchdowns.

Adrian Martinez was 22-33 for 266 yards and a touchdown. Devine Ozigbo and Martinez had the bulk of the load in the run game, combing for 158 yards and three touchdowns.

Its loss number seven for Frost in his first season, but the measuring stick for the shape of the program right now can’t be accurately measured in wins and losses.

“I think our guys are having fun playing football and are more confident than they’ve been since I’ve know them,” Frost said.

“Now to see how the guys are banding together and going blow for blow with a team like that… I’m excited at the same time I’m really upset and disappointed we didn’t find a way to win.”

The excitement will grow for this team if they can finish out the season strong. The Huskers have Illinois, Michigan State, and Iowa to close out the season. Nebraska’s showing against the Buckeyes proves that they could take on each of those opponents and win.