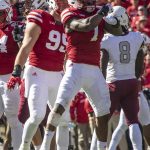 There would be no McNeese State like scare for the Huskers on Saturday. They demolished Bethune-Cookman 45-9, with the sole touchdown for the Wildcats coming as time expired in the 4th. The lopsided result will surprise no one. When an FCS opponent takes on an FBS team from a major conference, things can get ugly.

In just one half of football, Adrian Martinez racked up over 200 yards passing and three total touchdowns. Devine Ozigbo had 110 yards and a touchdown. Stanley Morgan hauled in 7 catches for 82 receiving yards and two touchdowns.

The signs that a rout was coming were apparent from the get go. The Wildcats simply didn’t stack up. Knowing what was ahead, Bethune-Cookman wanted to make the most out of their visit to Lincoln. A pair of Bethune-Cookman boosters bought Runzas from one of the stadium vendors before opening kickoff. Playing in front of 88,000 plus fans, Wildcat players made sure to soak it all in. Uriel Hernandez, the Wildcats pudgy placekicker, stole the show, but not necessarily for his play on the field.

The diminutive kicker’s trots to and from the sideline after punts were frequently the target of the Big Ten Network’s cameras, which were focused in on the five foot, four inches 209 pound player. Hernandez told reporters after the game that if you “come out here all the way from Daytona Beach, you’ve got to have fun.” The paycheck will be fun too for the cash strapped school, currently facing financial difficulties. The bill for Nebraska is reportedly in the ballpark of $800,000.

For their part, the Huskers won’t be too bothered for having to dole out all that cash, as they picked up their second win of the season in stylistic fashion. There may not be much you can learn about the areas your team needs to address when you play an opponent as weak as Bethune-Cookman, however Scott Frost and Nebraska Athletic Director Bill Moos have managed to salvage something out of what became a tricky situation.

The Husker’s home opener against Akron was stormed out, which gave Nebraska three options – play Akron the following day on a Sunday morning, reschedule Akron for a December game during the Big 10 championship game, or schedule a game for the bye week on October 27th.

Option number one fell through after Akron pulled out of negotiations, and option number two had too many question marks surrounding it. What if Nebraska were to win the Big 10 West? What if the Huskers weren’t going to be bowl eligible and were forced to play a meaningless game in December? Would that mean the sellout streak would be in jeopardy?

All things considered, Nebraska made the right choice to play a game on Saturday, which essentially became a glorified scrimmage in the second half. UCF transfer Noah Vedral was able to play for the first time this season, after obtaining a waiver from the NCAA two weeks ago.

Vedral finished 2-9 for 29 yards through the air. However, the Wahoo native made an athletic play, diving for the pylon for a touchdown to cap off a 20 yard dash.

He wasn’t the only fresh face and Nebraska native to make an appearance. Matt Jarzynka, a senior from Loup City got a sack. Although Wyatt Mazour has had game time reps before, the running back out of Boone Central played especially well Saturday, eclipsing Maurice Washington in rushing yards on the day, with 55 to Washington’s 48. Much like those players, Frost grew up in Nebraska, a fact that isn’t lost on him.

“Those are the type of kids that I played with,” Frost said. “They’re the type of kids that make up the patchwork of this program.” The participation report was lengthy, as multiple Huskers saw game time as well, a good bunch of them who have never taken to the field, outside of the spring game. Getting involvement from those players was one of Scott Frost’s goals for this one.

“Ideally, we wanted to be in a game where we could get a lot of young guys experience,” Frost said. “You’ve got [Matt] Jarzynka making sacks and guys going crazy and some other guys out there making plays that haven’t gotten a chance to yet.”

This win feels good for Nebraska, but with Nebraska needing to head up to Columbus to take on the Ohio State Buckeyes, the good feelings could come to an end rather abruptly. But the Buckeyes are vulnerable. Just ask Purdue.