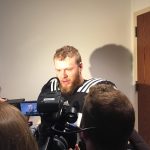 After missing the last four games, Mick Stoltenberg is back practicing in full pads this week. The 6-5, over 300 pound senior was surrounded by reporters after practice, where he was asked about his availability and condition after missing so much time.

Stoltenberg knows he’s lucky. “I’m blessed it wasn’t a season-ender. I’m blessed that I really haven’t missed too much time in my career despite all the injuries that I’ve had.”

In his stead, both Carlos and Khalil Davis have stepped up to help fill his shoes. The twins have played well in his absence, earning themselves a pair of Blackshirts in the process.

Sophomore defensive end and Nebraska native Ben Stille also earned himself a Blackshirt, yet he turned it down. Stille met with the media today to further explain his decision.

“From the definition of what I’d been told what a Blackshirt was from Grant [Wistrom] and Jason [Peter]… it just didn’t sit right with me putting that jersey on if I hadn’t lived up to that [standard] during the game.”

Nebraska faces off against Bethune-Cookman this Saturday, an FCS team. The Huskers will be looking for their second win in a row.