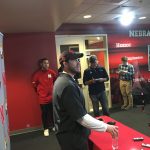 After getting the day off Monday, the Huskers were back to work, practicing at the Hawks Championship Center Tuesday for a little over two hours. Defensive Coordinator Erik Chinader was at the podium, where he revealed that four new players have joined the ranks of the Blackshirts.

Corner back Lamar Jackson, safety Tre Neal, and defensive linemen Carlos and Khalil Davis were all awarded a Blackshirt at practice Tuesday. Sophomore defensive end Ben Stille also was offered a Blackshirt, however Stille turned it down, feeling that he had not yet played well enough to earn one.

Chinander said that the coaching staff wanted to “wait for an opportune time” to hand them out to the rest of the starters, as the Husker’s string of consecutive losses did not allow for that.

The Huskers are getting geared up for their upcoming game against Bethune-Cookman, an FCS team from Dayton Beach, Florida. The Wildcats are 4-4 this season, and hail from the MEAC conference.

After beginning the season 0-6, the Huskers are on the verge of winning two games in a row if they can get it done against Bethune-Cookman this upcoming Saturday.