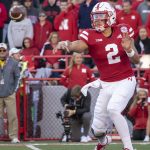 Adrian Martinez has been honored as “co-Big 10 Freshman of the Week,” after having an excellent game against Minnesota. Martinez went 25-29 and scored four total touchdowns. However after all that, Martinez had to share the distinction.

Scott Frost was at the podium on Monday during Nebraska’s weekly news conference, where he was asked about the award. At first, Frost was taken aback. “Co-freshman player of the week?” Frost said, befuddled. “Who was the other one?” A few reporters shouted out “Rondale Moore,” the Purdue receiver who torched Ohio State for 170 yards and a couple touchdowns. “Oh yeah,” Frost said. “He deserves it too.”

Frost was effusive in his praise of Martinez. “We got a good one. For him to be doing what he’s doing at his age, it’s pretty impressive.” Martinez himself was much more nonchalant in his response. “I’m definitely honored, and want to keep building on it.”

The Huskers will be looking to build on their success against Minnesota, with a game against FCS opponent Bethune-Cookman. The game was originally supposed to be Nebraska’s bye week, but the athletic department scrambled to fill the open date after the Akron game was cancelled on September 1st.

In order to compensate somewhat, Frost gave his players the day off Monday. “It’s not ideal, because we need to get ready for this game,” Frost said. “12 weeks in a row is tough… We feel like one day off would benefit them more than trying to get them back out there again.”

Bethune-Cookman has a 4-4 record thus far and since 2010, has won a share of the MEAC (the Mid-Eastern Athletic Conference) title five times. Nebraska’s game against them will be an 11 A.M. start time this Saturday, October 27th.