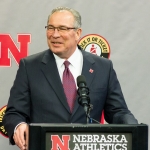 Athletic Director Bill Moos and Head Coach Scott Frost met with the media today, days before Nebraska takes on Akron in their season opener. Moos began the conference, where he hit on topics ranging from the tunnel walk to conference scheduling.

Moos opened up by describing Nebraska Athletics as being in “exciting times,” before adding that he wasn’t a fan of night games, as they made for “a long day for the ol’ AD.”

Moos confirmed that the Tunnel Walk would be undergoing changes, and that the changes will “honor the past” while forging something new for the young generation of Husker players. There were no specifics given about exactly how the music or other features of the tunnel walk would change, however.

With the 2022-2025 conference schedules being released yesterday, Moos addressed some of the factors gone into the decision making process. “One of the arguments of addressing our schedule was that the SEC was putting one and sometimes two in the four team playoff,” Moos said. “They only play eight conference games, and [put] pretty weak non-conference opponents on the schedule.”

Also, Nebraska will be seeing an alternate uniform this year, which will be worn in honor of Veteran’s day. Nebraska plays Illinois on November 10th. Veteran’s day is the day before.

Frost stated that “it had been a good week” of practice, and that the players have “done consistently what we asked them to do.”

No decision has been made on the naming of captains for the year. That decision will be made on a “game by game” basis, Frost said.

Nebraska will take on Akron this Saturday night at seven o’clock. The last and only time Nebraska played Akron was the season opener in 1997, where Frost was the starting quarterback.