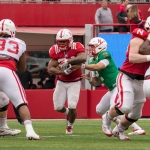 He used the phrase “day-by-day” multiple times in that span, as the team has adopted that motto during their practices leading up to the first game.

“If we get better each day, then the sky’s the limit,” Walters said. “I think this could be one of the top offenses in the Big Ten if we take care of business each day.

Wednesday’s workout, the fifth of fall camp, was the first one where the team practiced in full pads. No big surprises, but Walters was pleased with what he saw.

“Good energy,” Walters said. “Guys stepped on that field and they were ready to go. Anytime you put (the team in) full pads, there’s that extra juice. Guys got after it, so it was good to see that when we throw the pads on, we don’t take a step back.”

One player that’s been a pleasure to watch for Walters is running back Tre Bryant. Bryant confirmed Wednesday that he has been granted a medical redshirt, and will be technically be a sophomore this season with three years of eligibility left.

“It’s actually kind of a blessing,” Bryant said. “You get that experience, and you also that year back, so it’s like I played two games for free almost.”

Bryant played for only six quarters last season, but racked up 299 yards and two touchdowns in that time before being sidelined with a right knee injury. He had knee surgery in mid-October, shortly after the Huskers’ loss to Ohio State.

Another running back who has seemingly caught everyone’s attention this fall is true freshman Maurice Washington. The four-star from Cedar Hill, Texas just arrived on campus last week in time for the first practice, and has wasted no time in making a splash.

“He’s just fast man,” true freshman quarterback Adrian Martinez said. “He can do it all. He’s a damn good player. Husker Nation is really going to love him.”

Much like Washington, Martinez is a true freshman battling for a starting spot on offense. Redshirt freshman Tristan Gebbia is the other top contender at quarterback, while sophomores Andrew Bunch and Noah Vedral are also in the mix. Coach Frost said at Big Ten Media Days that he’ll announce the starter under center a week before the first game.

Until such time, the competition remains wide open.

Other news from practice