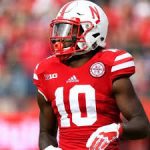 Spielman, who was named to the Biletnikoff Award watch list last week, showed his versatility during a record-breaking freshman season which saw him earn All-Big Ten recognition at both wide receiver and kickoff returner.

He hauled in 55 passes for 830 yards and a pair of scores, establishing school freshman marks in receptions, receiving yards, 100-yard receiving games (two) and all-purpose yards (1,572).

Spielman ranked first or second among all FBS freshmen in receiving yards, receiving yards-per-game, catches and all-purpose yards in 2017. He also set Nebraska’s single-game receiving yards record with a 200-yard performance against No. 9 Ohio State.

In conference play, Spielman became just the second Big Ten freshman since 1985 to lead the league in receiving yards per game during the conference season (88.1).

He tied Wisconsin’s Jonathan Taylor for second in the Big Ten with an average of 157.8 all-purpose yards per game in league play and was fifth in catches per game.

Spielman will look to be NU’s first-ever Hornung Award winner. Ameer Abdullah was a finalist for the award in 2014.