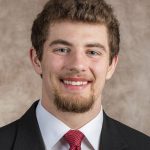 The Mackey Award is presented to the most outstanding tight end in college football.

Stoll, the Huskers’ lone returning letterwinner at tight end, is in position to have an increased role in the Huskers’ offense in 2018. The 6-foot-4, 245-pounder from Lone Tree, CO played in all 12 games as a redshirt freshman last season, catching eight passes for 89 yards and a pair of scores.

Stoll had all eight of his receptions in the final six games, including three catches for 41 yards against Northwestern, and touchdowns against the Wildcats and Penn State.

The 2018 Mackey Award recipient will be announced on Dec. 5 and then presented live on Dec. 6 at The Home Depot College Football Awards Red Carpet Show on ESPNU.

Stoll isn’t the only Husker to receive preseason recognition. Wide receivers Stanley Morgan and J.D. Spielman were both named to the Biletnikoff Preseason Award watch list on Thursday.