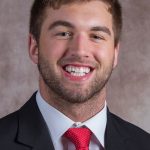 All three of these players were no longer listed on Nebraska’s roster Monday.

Snyder, Engelhaupt and Brokop all played sparingly during their time with the Huskers. This means sophomore tight end Jack Stoll, redshirt freshmen Austin Allen and Kurt Rafdal, along with true freshmen Cameron Jurgens and Katerian Legrone are the only scholarship tight ends left on roster.