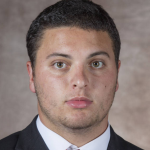 The son of former LSU head coach Les Miles, Ben left Nebraska in May. Miles will walk on Texas A&M and will likely have to sit out this upcoming season. He still has three years of eligibility.

Made it to Campus… I am really excited about my opportunity here in College Station! Once again, thank you to the coaches that recruited me to Nebraska and invested in me for a year. This is my next step. I can’t wait to get started! pic.twitter.com/6XELTHBmTy