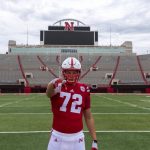 Matthew Anderson grew up playing chess, tennis and was also an Eagle Scout.

He played a month in junior high before walking away.

“I wasn’t really able to embrace it, so I stopped playing,” Anderson said.

This past fall, during his junior year of high school, Anderson decided to give the game another shot. There were two things about football he was drawn to – the first was recognition.

“I remember I wanted to play defensive end or tight end, wide receiver,” Anderson said. “Someone that gets all of the praise.”

As soon as he stepped on the field, Anderson was assigned to offensive line. Not exactly what he had in mind.

“I was angry. I came home, complaining about it. I’m not going to be able to hit anybody! All I get to do is block! Then, the first game rolls around, I hit somebody and they fall to the ground. Then, I was like, ‘This is actually kind of fun!'”

“That’s one of my favorite things about football that you can just hit someone as hard as you can and you get praise for it,” Anderson said. “Quite frankly, it’s the best sport in my opinion when it comes down to that.”

He’s the No. 1 ranked tennis player at Leesville High School in Leesville, Louisiana, but his efforts on the court are going toward making him quicker on the field.

“It’s a sport that I play in the offseason just to kind of keep nimble.”

Nebraska was the first major program to get in touch.

Anderson gave praise to Held, offensive line coach Greg Austin and of course, head coach Scott Frost in his recruiting process. But, the only who really sold him on Lincoln was head strength and conditioning coach Zach Duval.

“I really love the way he talks about helping athletes,” Anderson said. “He really cares about what he does, and you can really tell the sincerity in all of his words and all of the things he said.”

Anderson is certainly new to football, but his 6-foot-6, 250-pound frame puts him at an advantage. His size and athleticism make it seem like he’s been playing for much longer than he has, but Anderson knows there’s much work left to be done if he wants to hit people and get praised for it at the next level.

Anderson plans on redshirting once he’s on campus next year, but his pursuit to become a player who both hits people and gets praise for it won’t slow.

Fortunately for him, Nebraska is a place where many offensive linemen have come through and received recognition for knocking people over.