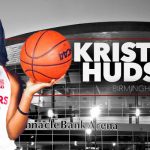 Kristian Hudson of Florida International is joining the Nebraska women’s basketball team as a graduate transfer. This news was announced on Friday.

Hudson fills a position of need for the Cornhuskers. The team lost seniors Jasmine Cincore, Janay Morton and Emily Wood.

“We are excited to add Kristian to our Husker family,” Nebraska women’s basketball coach Amy Williams said. “Her experience coupled with her enthusiasm to help us raise the bar for our program make her the perfect fit.”

Williams also announced on Friday that senior Darrien Washington and juniors Rachel Blackburn and Bria Stallworth will not be on Nebraska’s active roster in 2018-19. All three will be enrolled and on scholarship at the University while they complete their undergraduate degrees.

This means that Maddie Simon will be the only other senior on roster along with Hudson. The Huskers still return their top five scorers from last season.

“While you look at numbers and returning points and returning stats, that doesn’t always tell the whole story,” Williams said. “What we’re really going to be looking for this upcoming season is where is our leadership going to come from.”

Williams says Simon is ready to make 2018-19 her best season yet. The Lincoln Pius X alum averaged 10.1 points and 5.3 rebounds in her junior season, scoring in double figures in 14 games.

“She wants to make this the best season she’s been a part of as a Husker,” Williams said.