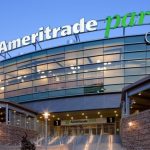 The Detroit Tigers and Kansas City Royals will play a regular-season game in Omaha the week before the 2019 College World Series on June 13, 2019.

“The College World Series in and of itself is a great event with a great tradition,” MLB commissioner Rob Manfred said in a press conference Thursday at TD Ameritrade Park with numerous officials from baseball and Omaha.

“We hope by playing here, we’ll be bringing even more attention to this game and help strengthen our relationship with the NCAA and with college baseball as a whole.”

Major League Baseball and the NCAA have been working to arrange a game as a kickoff event to the CWS.

“We talk about the importance of doing everything in our power to continue to grow this great game,” Moore said. “We believe in it, we’re passionate about it, we love the opportunities that it creates for young people.”

This game next year was planned with the hope of bringing the professional and collegiate baseball ranks closer together – with an MLB game being played in college baseball’s capital.

“We’re at a point in time in the history of baseball where I think we all understand the importance of being united,” Moore said, “and doing everything in our power to grow the game. It’s a special honor for the Royals to be able to take part in this historic game.”

It’s unconfirmed if more major league games will be played in Omaha past 2019, but Manfred believes this game could open the door for more MLB events to be held in the city, like the MLB Draft which is currently held in Secaucus, New Jersey.

“We do see potential in the idea of bringing the draft to the site of the College World Series,” Manfred said. “It’s one way, there may be others, that you could rationalize the baseball, and I mean baseball broadly-defined calendar.”

The motive behind this game is similar to the regular-season games played at Bowman Field in Williamsport, Pennsylvania, in conjunction with the Little League World Series. The 2018 Little League Classic between the New York Mets and Philadelphia Phillies is set for August 19.

“We have seen the success the Little League Classic has had,” said Karl Ravech, the host of ESPN’s Baseball Tonight. “It’s one of those where you go into it, and you assume it’s going to be great, and then it exceeds expectations 100-fold.”